Sonnets, haiku, limericks, and free verse are all delightful styles of writing poetry. From short and silly to tragic and epic, poetry is a powerful form of the written word. I do not formally teach poetry to children but I do choose to expose them to varying styles of poetry. We read poetry aloud most days. They also read selections on their own. While perhaps not the most scholarly approach, my children have developed a love and appreciation of poetry.

A few weeks ago during our group studies, I read O Captain!, My Captain! by Walt Whitman. It was the first time they had heard this poem and it had a powerful affect on a few of the children. After discussion the poem a bit, I challenged the children to write poems of their own but was meet with a mighty outcry. Then I offered a deal: if you wrote a poem, you were excused from math for the day. Since no one has a deep, abiding love of math, everyone scrambled for paper and pen to begin a poetic journey.

In a short time I has a stack of poems in my hand that were absolutely wonderful and showcased the personalities of my children to perfection. They agreed to posting them here and I hope you enjoy!

The Princess – Martha (5) (with some help from mom)

Blue and straight were her hair

Were the things that she loved

Cooking made her smile

Still plays with toys as a teenager

I walked down the road

And saw a fox.

The fox was big.

I could not move.

My legs were still as a rock.

The fox saw me.

He opened his mouth

He jumps from rooftop to rooftop

Is on his back

The color of his suit is blue and black

Dark woods are his home

From the darkest lake he drinks

Dark colors are his favorite

The movie he likes is Ninja Turtles

Turtles are his favorite animals

Is that a surprise?

A turtle shell is where he sleeps

He is The Ninja!

His powers are electric, smoke, and lava.

He is the greatest superhero.

He is not finished with the words on the page.

He says to call it the end.

Do your children enjoy writing? I’d love to hear about it!

For the past year or so,  I have slowly been transitioning our days, our studies, our schedules back to what I envisioned years ago. How easy it is to allow a slight slip in focus to lead us off track.

With a desire to more fully implement a Charlotte Mason style of education in our home, I have moved the children into using Ambleside Online.The move has been slow and steady. To save my sanity, I am taking it step by step instead of jumping in head first. Wise I think as I am taking nine children down this path with me.

As I read and study and refresh my mind to this philosophy of learning, I am continually reminded of the importance of learning, reading, writing, and studying for myself. Naturally I am reading selections from my older children’s studies and reading aloud to my younger ones. This can be challenging but I love to read and read to my children so it makes my heart happy!

Other areas, however, are not as easy for me to implement for myself. A Commonplace Book and a Nature Study book are two items that I have delayed beginning for myself. My focus has been wrong. Does it really  matter if I don’t sketch well? If my handwriting isn’t perfect, is my life going to go off course? I think not.

So I begin first with a Commonplace Book. My two oldest girls enjoy theirs. They are diligent to treasure words and thoughts and ideas. Now I will do the same. For myself and to set an example for my younger ones as well.

A simple composition book with a pretty design. A pack of pens. Endless words, thoughts, truths, ideas…….With paper and pen, I begin. 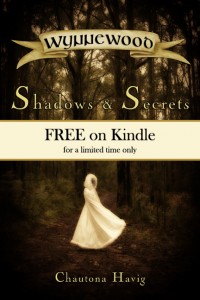 No one knows what the cloaked creature is or why it is so terrifying. The villagers of Wynnewood only know that they must stay away from “the creature” for fear of their physical and spiritual safety. An unfortunate encounter with a dragon introduces Philip Ward to the creature, and to his surprise, he finds a friend, confidante, and companion in more adventure than he’d ever dreamed possible. Follow Philip and the creature as they rescue a lame child, discover “pirate treasure,” and test the mettle of true friendship.  Shadows & Secrets is the first book in the Annals of Wynnewood.

For a limited time, you can download a FREE copy of Shadows and Secrets for your Kindle. You do not want to miss this opportunity. Chautona  Havig does a marvelous work in bringing the village of Wynnewood to life and drawing you into the lives of Philip and the creature.

Children of all ages will enjoy Shadows and Secrets. It is a great family read aloud! Adventure, friendship, mystery and love for “I AM’.  You don’t want to miss this opportunity!  Be warned…..after Shadows and Secrets, you will want the whole series!

Make sure you swing by her blog….let her know if you share about the free download and get a chance to win a free book! Let her know who sent you over!